My Nabaztag has been collecting dust on my desk since the online service powering it died this summer.

The first meeting of GTUG Milano was the perfect excuse to have some fun and use the Nabaztag for something useful. Using this Nabaztag disassembly video it didn't take long to pick it apart and figure out which wires controlled what.

Thomas took care of all the electronics work and I added some lines of code to the Android ADK demo code to create a proof of concept Android ADK powered rabbit. 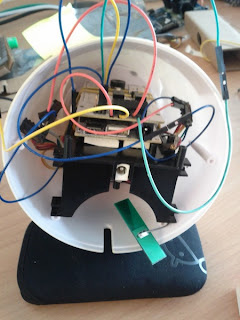 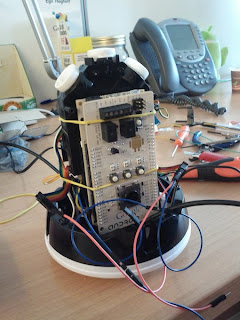 Take it for what it is; a proof of concept that just controls the two ears, 3 multi color LEDs and does some text to speech. It does not do any of the useful things that the Nabaztag did like reading mails, rss feeds, showing weather information etc.


It could though, as all of it is easy to implement on Android. Which is why it's time to make it do something useful :-)

I've decided to replace the Android ADK Demo Shield with a Arduino Mega ADK which is smaller an "only" costs 59 euro. It will be the interface with the Nabaztag hardware and control the ears and LEDs initially. The rest of the work will be done by an Android device.

To be perfectly honest, I probably got a bit carried way when ordering the Arduino Mega ADK. I got some LEDs with the idea of organizing them in a grid to show basic symbols, but then I found the 32x16 LED matrix and couldn't resist it. The idea of replacing the 3 multi colored LEDs found in the Nabaztag with something that can display information was just too much to resist. I think it should fit in the almost empty Nabaztag shell but I may have to do some rabbit surgery if it doesn't.

Add the power of cellbots and we have a pretty powerful rabbit on our hands. Let's just hope it does not turn Evil...